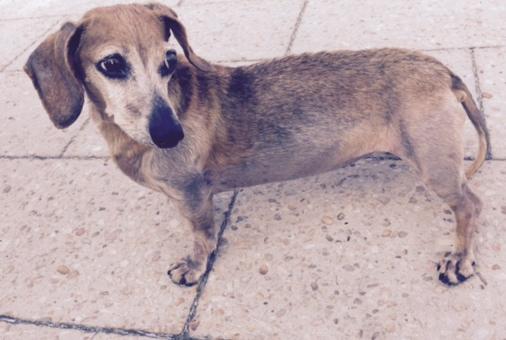 “I am continually astounded by how Treatibles have helped my dog Teva. And the reason I know they have is that there is nothing else that I have added to her routine other than these chews.

Teva has a few things going on. There are three major ones. She has a compressed disc in her neck, affecting only the motor nerve so she is not in discomfort. But her front legs collapsed when she walked, causing her face to smash to the ground, cutting her nose and bruising her front paws. It started happening so often that I rarely allowed her to walk outside.

I started giving her Treatibles, but I only gave her a very tiny bit in the beginning. But I saw a difference within 2 days, so I started giving her the recommended administration after that. She not only fell less and less but was walking faster. She is 13-1/2 and she walks a mile, sometimes more, every day! She almost never falls anymore.

The second issue is a growth in her mouth that was removed in March, but the irregular cells had already spread to her lungs. Eight months later and it has not grown back in her mouth, and it must be stable or growing very slowly in her lungs because she has no symptoms that usually accompany this condition. I credit Treatibles.

The third issue is an adrenal disorder. I was worried that she might not be able to continue using Treatibles, but then I read that certain phytocannabinoids may assist her body. She now only has very minor symptoms.

I have never pushed a product like I do with yours. Every time someone asks me what is going on with my dog (she has an odd gait; people have commented that it looks like she is dancing when she walks), I always tell them the reason she is even walking is because of Treatibles.

Thank you for Treatibles!”